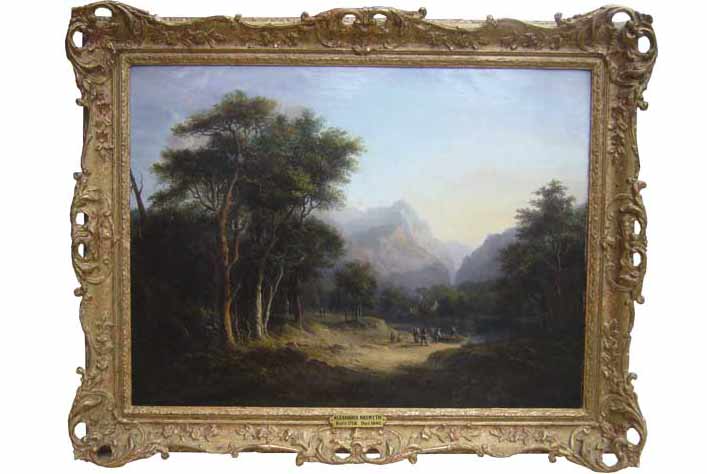 Born in Edinburgh, he studied at the Trustees’ Academy under Alexander Runciman, and, having been apprenticed as an heraldic painter to a coachbuilder, he, at the age of sixteen, attracted the attention of Allan Ramsay, who took the youth with him to London, and employed him upon the subordinate portions of his works. Nasmyth returned to Edinburgh in 1778, and was soon largely patronized as a portrait painter. He also assisted Mr Miller of Dalswinton, as draughtsman, in his mechanical researches and experiments; and, this gentleman having generously offered the painter a loan to enable him to pursue his studies abroad, he left in 1782 for Italy, where he remained two years. On his return he painted the excellent portrait of Robert Burns, now in the Scottish National Gallery, well known through Walker’s engraving. Political feeling at that time ran high in Edinburgh, and Nasmyth’s pronounced Liberal opinions, which he was too outspoken and sincere to disguise, gave offence to many of his aristocratic patrons, and led to the diminution of his practice as a portraitist. In his later years, accordingly, he devoted himself mainly to landscape work, and did not disdain on occasion to set his hand to scene-painting for the theatres. He has been styled, not unjustly, the “father of Scottish landscape art.” His subjects are carefully finished and coloured, but are wanting in boldness and freedom. Nasmyth was also largely employed by noblemen throughout the country in the improving and beautifying of their estates, in which his fine taste rendered him especially skilful; and he was known as an architect, having designed the Dean Bridge, Edinburgh, and the graceful circular temple covering St Bernard’s Well. Nasmyth died in his native city. His youngest son, James Nasmyth, was the well-known inventor of the steam hammer. Alexander's six daughters all attained a certain local reputation as artists, but it was in his eldest son, Patrick Nasmyth, that the artistic skill of his family was most powerfully developed. Having studied under his father, Patrick went to London at the age of twenty, and soon attracted attention as a clever landscapist. He was a diligent student of the works of Claude and Richard Wilson, and of Ruysdael and Hobbema, upon whom his own practice was mainly founded. His most characteristic paintings are of English domestic scenery, full of quiet tone and colour, and detailed and minute expression of foliage, and with considerable brilliancy of sky effect. They were executed with his left hand, his right having in early life been injured by an accident.